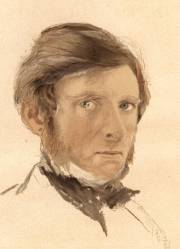 See the original
painting by Millais


Ruskin is one of the authors on the
wider reading list for the new AQA
Victorian option: prose reading

The cover of the Penguin Selected Works, to the right, shows John Millais' portrait of Ruskin standing proud beside a Scottish stream. The story behind the painting (which you can see better here) is as interesting as the work itself; whilst he painted Ruskin, Millais was falling in love with Effie, Ruskin's wife. Within two years, Ruskin's marriage had been annulled and Effie married Millais.

Some works by Ruskin

John Ruskin on the Web

The AQA specimen question paper for the new Victorian option includes an extract from Ruskin's Fors Clavigera. Although brief, this extract is rich in allusions, especially for anyone who has visited the Derbyshire beauty spot, Monsal Dale, that Ruskin so passionately defends. By an irony that Hardy, for one, would have appreciated, the railway whose opening in 1863 Ruskin so deplored has long gone and the disused viaduct is now itself part of the scenery. Roy Hattersley went so far as to say: 'It always seems to me that the viaduct, built where the rocks once were, adds to its enchantment.' (See the Wikipedia entry for Monsal Dale for some views.) A further irony is that although Ruskin invoked the gods, the Romans themselves had not hesitated to despoil the Derbyshire Dales for lead (see the Great Hucklow Lead Legacy project, for example).

Fors Clavigera, from which the letter about Monsale Dale is taken, was addressed to the 'Workmen and Labourers of Great Britain' and first appeared in 1871. Paul Sawyer, in his article on the work on the Victorian Web, quotes Ruskin: 'Fors is a letter, and written as a letter should be written, frankly, and as the mood, or topic, chances.... True, the play of it (and much of it is a kind of bitter play) has always... as stern final purpose as Morgiana's dance; but the gesture of the moment must be as the humour takes me.' Sawyer describes the title as 'protean': 'the first word may mean "force," "fortitude," "fate," or "fortune"; the second "club bearer," "nail bearer," or "key bearer"'.

I find penguins at present the only comfort in life. One feels everything in the world so sympathetically ridiculous; one can't be angry when one looks at a penguin.
Ruskin: letter to Charles Eliot Norton

In his own words at last

Now that's clear, here is the extract AQA used from Fors Clavigera, extended to include a few sentences that precede Ruskin's attack on the building of the railway. His reference there to making 'the sun draw brown landscapes' is to the invention of photography, which at the time produced sepia prints ('brown blots through a hole in a box'). This was another aspect of science and industry that was inferior to nature, though Ruskin was not averse to having his photograph taken and even experimented with photography himself.

You think it a great triumph to make the sun draw brown landscapes for you! That was also a discovery, and some day may be useful. But the sun had drawn landscapes before for you, not in brown, but in green, and blue, and all imaginable colours, here in England. Not one of you ever looked at them; not one of you cares for the loss of them, now, when you have shut the sun out with smoke, so that he can draw nothing more, except brown blots through a hole in a box. There was a rocky valley between Buxton and Bakewell, once upon a time, divine as the vale of Tempe; you might have seen the gods there morning and evening, - Apollo and all the sweet Muses of the Light, walking in fair procession on the lawns of it, and to and fro among the pinnacles of its crags. You cared neither for gods nor grass, but for cash (which you did not know the way to get). You thought you could get it by what the Times calls 'Railroad Enterprise'. You enterprised a railroad through the valley, you blasted its rocks away, heaped thousands of tons of shale into its lovely stream. The valley is gone, and the gods with it; and now, every fool in Buxton can be at Bakewell in half-an-hour, and every fool in Bakewell at Buxton; which you think a lucrative process of exchange, you Fools everywhere!

'Call me a fool,' writes Matthew Fort in The Guardian, 'but I can see any number of good reasons to be in Bakewell.... How many towns the size of Bakewell, I wondered, could boast a Tiroler Stüberl, Austrian Coffee Shop & Sausage Importer?' The answer, I suspect, lies in the large number of tourists who flock there - those same 'Workmen and Labourers of Great Britain' whom Ruskin addressed, perhaps, and their womenfolk?