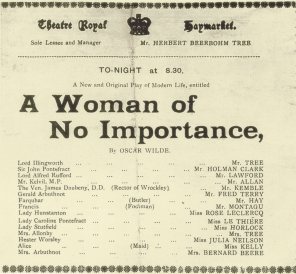 Cast list from the first production of the play in 1893

My dear young lady, there was a great deal of truth, I
dare say, in what you said, and you looked very pretty
while you said it, which is much more important, Lord
Illingworth would tell us.
Lady Hunstanton, Act II scene ii

A Woman of No Importance

'As a play A Woman of No Importance is nought; it merely consists of a few scenes borrowed from French drama, dropped into an impossible social milieu.' So wrote the reviewer on The Sketch on 26 April 1893, a few days after the play opened. Despite that, the first night was attended by Balfour, the Leader of the Opposition in the House of Commons (and later Prime Minister) and Chamberlain, leader of the Liberal Unionists. The Prince of Wales attended the second night, loved the play and told Wilde: 'Do not alter a single line,' to which the playwright is supposed to have replied, 'Sire, your wish is my command.'

The same issue of The Sketch felt obliged, nonetheless, to provide 'ladies' with full details of the dresses. It says a lot about the time that the anonymous writer devoted so much space to this - and felt no need to explain the numerous specialist terms used in the extract below.

Whatever shortcomings the critics may find in Mr Oscar Wilde's play, we are prepared to maintain that it cannot by ladies be regarded as a play of no importance. It is beautifully dressed, and one has an opportunity of studying in it every variation of modern fashion. Mrs. Bernard Beere [Mrs Arbuthnot], generally so remarkable in her choice of dresses, wore two severe-looking gowns, both black. The costumes, of course, were, by stage tradition, appropriate to a betrayed woman, and had the advantage of standing out strongly in grim, sombre majesty against the brilliant dresses of the butterfly women of the play. Mrs. Tree [Mrs Allonby], in the first act, as she stood on the terrace at Hunstanton Chase, seemed a dainty figure sketched by Lancret. Her dress, pure Louis XV., was of white silk chiné, with roses of every tint - a silk that reminded one of old-fashioned chintz. Her quaintly cut cloak of willow-green, open from throat to hem, with short pelerine, was edged with sable, and had a silk lining of a still softer shade; a branch of mauve orchids held in her hand gave the finishing touch of colour to the pretty picture. In the second act her dinner dress was charming in colour and design. The long train of pink satin, suspended à la Watteau, was bordered by trails of pink roses and lined with black satin, a combination unusual, perhaps, but perfectly successful. Its décolleté bodice of satin was finished with square revers edged by a tiny line of black jet; the revers half masked puffed sleeves of white crape, over which more roses fell in garlands.

Miss Julia Neilson's [Hester] first dress was delightful in colouring, for in the folds of her shot moiré all the tints of the opal seemed playing hide-and-seek. The skirt was plain and bell-shaped, and over the close-fitting bodice fell a deep frill of finely pleated crape. Her next dress, of white satin, was entirely veiled by silver-spangled tulle. In itself the dress, glistening and shimmering with every movement, was pretty, but somehow seemed hardly suited to the stately, puritanical Hester Worsley. Her last costume, 1830 in style, was of pinky yellow glacé silk. Miss Blanche Horlock's dresses were early Victorian - one of réséda satin with a berthe of thick cream guipure was especially graceful. Miss Le Thiere's violet velvet gown was an ideal dress for an elderly woman.

There is a copy of a page from this same issue of The Sketch in the Mary Evans Picture Library. It includes pictures of Herbert Beerbohm Tree as Lord Illingworth, Mrs Bernard Beere as Mrs Arbuthnot and the melodramatic moment when Gerald learns Lord Illingworth is his father. The image gives an idea of the staging, although the text is too small to read. Use the quick search facility on the home page to find picture 10107815.